3 Types of Pizza to Know

We’re covering pizza styles you or any pizza lover should know. Although they share the same ingredients, these pizzas could not be more different from one another. What’s your favorite style of pizza?

New York-style pizza is large and designed to be cooked in a slightly cooler gas-fired oven. It's stretched out slightly thicker than a Neapolitan base, but on the scale of pizzas, it's still considered thin crust.

The crust has to be sturdy enough to hold the toppings on a large slice. Crunchy or cracker-like are not adjectives that describe good New York pizza. The slice must crackle and bend gently when folded (AKA the "New York Fold") but never split. New York pizza owes its unique texture and flavor to two key components added to it: oil and sugar.

This pizza style originated in Naples, Italy. It's the simplest form of pizza out there and has the fewest ingredients. Just a couple of ingredients, blazing hot temperatures, and more sauce than cheese are the true characteristics of this pizza. The sauce to cheese ratio leaves the middle of the pie wet and not conducive to being served by the slice. Which is why it’s often seen eaten with a fork and knife. Neapolitan pizzas are generally pretty small about 10 to 12 inches, making them closer to the size of a personal pizza.

Commonly referred to as Deep Dish, it gets its name from the city it originates from. The distinct thick pizza with raised edges features the usual toppings like sausage, pepperoni, onion, mushrooms, and green peppers, but they are placed in reversed order and underneath the tomato sauce. The final product is then baked in a deep round pan with oil for crispiness and texture. 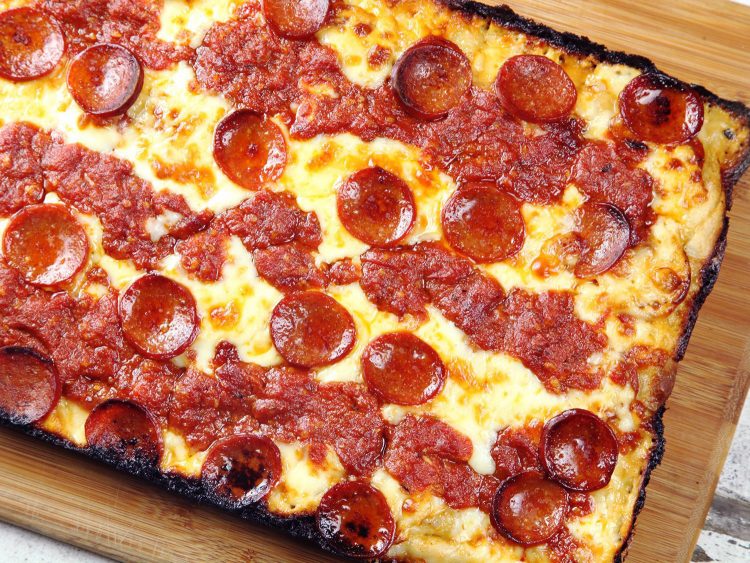 Detroit-style pizza was originally baked in a square automotive parts pan in the 1940’s. This iconic square pizza is also topped in an order similar to Chicago pizza but with the most common topping as pepperoni, then cut into square slices.

This is the simplest, most forgiving pie. Everything takes place in the bowl of a mixer and an oiled sheet pan.

In New York City, it's called Sicilian pizza, and it comes in inch-and-a-half-thick slabs coated with a thick layer of garlic-heavy tomato sauce and melted mozzarella cheese. Long Islanders refer to it as Grandma-style pies. The basic process is filling a tray with your pizza dough loaded with olive oil. As it bakes, the bottom of the pie essentially fries, coming out crisp and delicious. The end crust should be well-browned with bits cheese, and a soft, moderately chewy, crust.

Get the latest news, product updates, and more.